These are the men and women who, every day, sign a blank check to the United States government. For their confidence and willingness to do government bidding – as Airmen, Soldiers, Sailors and Marines – they are rewarded with the GI Bill, a way for them to complete their education and qualify for home loans, healthcare medical and other benefits.

In Pueblo, a growing veteran population uses the GI Bill to attend Colorado State University-Pueblo. The university is also doing its part to ensure a smooth transition for these men and women, some of whom have returned from combat or deployments in hostile environments.

“Our office is the point of contact,” said Laura Barela, director of the CSU-Pueblo Military and Veterans Success Center. Barela has been part of the university’s veterans program for fifteen years. “It’s a one-stop shop,” she says. Veterans enrolled in the school can show up for answers to everything from finding out where to get medical or mental health issues to solving sometimes hard-to-negotiate VA bureaucracy. Her website promises a helping hand from “transition to graduation.”

Separation from the military and transition to a civilian world is not always straightforward or seamless. Veterans are often older, have radically different life experiences, and are sometimes burdened with experiences that linger and manifest in very different ways than traditional students. Unemployment, homelessness and mental health issues are often daily realities for veterans.

A report by America’s Warrior Partnership indicates that 17 veterans commit suicide every day, double the suicide rate among civilians. Drug overdose is the most common cause of death in this group. Suicide by veterans is also four times higher than the number of suicides among civilians.

The university has a health center that offers counseling and a veterans services officer “who comes in once a week” and meets with veterans to sort out any issues they may need.

CSU-Pueblo’s office, the MVSC, has three full-time staff on duty to answer almost any question a student-veteran may have. His website (csupueblo.edu/military-and-veteran-success-center//promises.

CSU-Pueblo’s Military and Veterans Center was honored as a Purple Heart Designated Institution for its work. Barela said the school is known for its comprehensive outreach to veterans, spouses and dependents. Her efforts, she said, extend far beyond the classroom.

The office regularly brings veterans together for social activities, including designating a week each school year dedicated to veterans. The campus also has a Veteran’s Lounge where those who have worn the uniform can study, watch television, or simply meet to rest between classes.

The center’s mission, Barela said, has evolved over time. “My job has changed,” she said. When she started, the emphasis was on the “educational side” of college. Today, a veteran can visit the office and get help writing a resume. Barela says it’s not always the easiest thing to translate military duties into things that would translate into the civilian world. “We continue to grow.”

Overall, CSU-Pueblo’s efforts to serve veterans have become one of the premier examples of the state serving those who have served the nation. It is open to all veterans, spouses and dependents. It’s also open to service dogs, which she said are welcome at any time. “We have vets who come all the time and bring their support dogs. It’s amazing the positivity they bring. 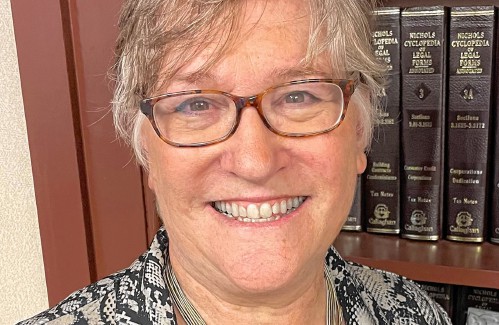 Making the News in Business, November 10